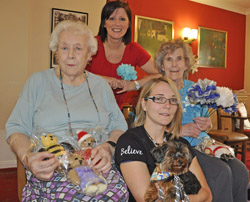 A determined Dorset woman who suffered a stroke when she was just 19 has praised a Mudeford care home for raising more than £750 to help other young stroke survivors.

Claire Whitehouse, who campaigns on behalf of the Stroke Association, said the generosity of elderly residents at Colten Care’s Avon Reach home had left her “blown away”.

The money was raised through a gala dinner, raffles and the sale of arts and crafts items made by residents including knitted teddy bears and paper flower displays.

Claire, 23, from Burton near Christchurch, said the cash would help towards providing better information and facilities for young stroke survivors who can feel very isolated and alone after leaving hospital.

She said: “Many of them need extra support, mainly to get over the emotional effects, as they make their way back into work or college. Strokes among young people are more common than you might think. I was fit and had played football since I was six. I never dreamt I’d have to actually think about what is involved in simply walking.”

Claire, who is writing a book about her stroke experience, said the Avon Reach fundraising effort showed there did not have to be a gap between the charitable interests of old and young.

She said: “The residents are in a different age group but they still wanted to donate to help young stroke survivors. It blew me away when I first heard. I thought ‘wow’. I couldn’t believe it.”

Avon Reach resident Ray Holliday presented a cheque for £765.60 to Claire at a reception in the home.

Also there was Claire’s Yorkshire terrier Benny who was born on the same day she had her stroke four years ago and was a present from a family friend.

Remarkably, Benny also has a diagnosed neurological condition that has left him with a stroke-like weakness on one side.

Claire said: “He loves coming with me on visits. He is a kindred spirit who seems to know whenever I am in pain. He just senses it.”

As well as the Stroke Association, Avon Reach has raised money for numerous other charities in the past year. They include Children in Need, the RNLI and Macmillan Cancer Support.

Avon Reach Activity Organiser Sandra Boulton said: “We encourage residents to nominate a main charity to help every year, leaving scope for other organisations to be supported too. Residents then contribute directly in meaningful ways such as making arts and crafts to sell at fundraising fetes and in reception.”