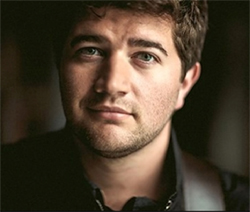 Singer-songwriter Rupert Stroud, 26, from Ilkley, has been made a Champion of Alzheimer’s Research UK, the UK’s leading dementia research charity. Rupert was given the title in recognition of his exceptional support for the charity following the loss of his much loved grandma Eileen to Alzheimer’s disease in 2009, aged 87. Alzheimer’s Research UK now has a small but growing group of 23 Champions – supporters who have gone above and beyond to help the charity in its mission to defeat dementia.

In recognition of being made a Champion, Rupert has contributed a blog post to Alzheimer’s Research UK’s new blog site at www.dementiablog.org/rupert-stroud-always

During the past 18 months, Rupert has raised over £5,000 for vital research into Alzheimer’s disease and other forms of dementia. He has achieved this by releasing a single entitled Always http://bit.ly/HZzLjQ, with 100% of the profits donated to the charity, and hosting a fundraising music concert at the Ilkley Playhouse. In addition to raising vital funds for research, Rupert has spoken out passionately about his grandma to the media and at public events, to help raise awareness of Alzheimer’s Research UK’s pioneering research and improve understanding of dementia.

Tipped as one of the hottest young acts to emerge from Yorkshire and with increasing national and global fame, Rupert’s music is a mix of indie, rock and pop. All his songs are based on his life experiences and produced by Will Jackson at Soundworks Studios in Leeds. Rupert’s latest single Never Back Down has received a lot of attention, including plays on Dermot O’Leary’s show on BBC Radio 2 as well as BBC Radio Leeds, BBC Radio London and XFM. He is currently writing and recording tracks for his third album, due for release in spring 2014.

Rupert, who lives in Ilkley and studied at Leeds Metropolitan University, talked about his grandma (who he fondly refers to as Gangan) and his motivation for supporting Alzheimer’s Research UK:

“When Gangan was diagnosed with Alzheimer’s back in 2003, I was a rather naive teenager and didn’t really know much at all about the illness. I assumed, as many did back then, that it was a sign of getting old. It took a long time to get a diagnosis and day-by-day, month-by-month this devastating disease gradually stole her memories and lovely character.

“Gangan was a sweet soul – we were always very close. When she passed away I dealt with the pain and sadness in my usual way by writing a song or poem – that’s when I wrote my charity single Always. It’s one of the most heartfelt songs I’ve ever written and a lasting tribute to Gangan. I’m delighted that the single is raising money and awareness for Alzheimer’s Research UK’s pioneer research to find new treatments and a cure.

“I’m proud to be doing something positive to help in the fight against dementia and I’m honoured to be made a Champion of Alzheimer’s Research UK. I would like to encourage younger generations who have a grandparent, aunt, uncle or even a parent with dementia, to do what they can to raise awareness. It’s our generations who will reap the benefits of today’s pioneering research.”

“We are delighted to make Rupert a Champion of Alzheimer’s Research UK – he has shown such enthusiasm in his support for the charity and truly deserves this honour. Rupert is always willing to help us make the case for dementia research, and this is our way of showing our appreciation for his hard work and dedication.

“Rupert does an outstanding job in raising the profile of our work. He has helped countless people understand the reality of Alzheimer’s disease by speaking movingly about his grandma in media interviews and at our public events. His fundraising and promotion of research is a real asset, helping to bring better forms of diagnosis, preventions, new treatments and a cure ever closer.

“There are hundreds of thousands of people across the UK living with dementia today, including over 7,500 people in Leeds and over 5,000 people in Bradford. Dementia poses one of the greatest threats to public health now and in the future but funding for research still lags far behind other serious diseases. We rely on public donations to fund our crucial research and it’s thanks to the commitment and support of people like Rupert that we are able to continue our pioneering work.”