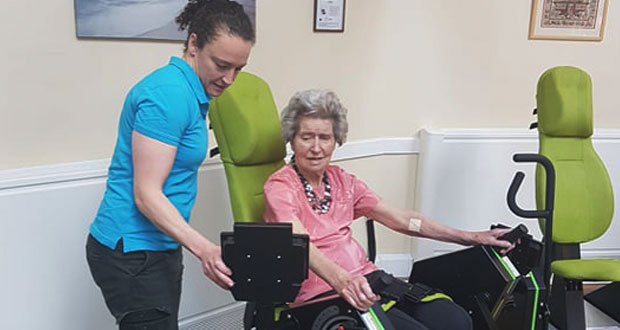 The study, called Keeping Active in Residential Elderly (KARE), is being conducted by the Physical Activity and Nutritional INfluences In ageing (PANINI) project research group at the University of Birmingham. Participants are exercising using specialised chair-based physical activity machines, which are specially adapted and designed resistance training machines for frail older adults.

PhD student Paul Doody, of the University of Birmingham’s School of Sport, Exercise and Rehabilitation Sciences, said: “The great benefit of these machines are that they are specially adapted resistance training machines for older adults and are comfortable, easy to use, and are pneumatic so work on air-based resistance and therefore there are no weight plates involved. They allow the difficulty to be increased in small amounts of just 100 grams, which is similar to the weight of a small apple.”

PhD student Bridgitte Swales, also of the University of Birmingham’s School of Sport, Exercise and Rehabilitation Sciences and the lead researcher on the study, said: “The machines work by scanning the user’s wristband on a touch screen, and pressing buttons to increase or decrease difficulty. They allow us to record exactly how much the physical activity equipment was used during this study.”

Residents living in Olivet Care Home and Sheltered Apartments in Birmingham, run by Christadelphian Care Homes, have volunteered to participate in the study. Those who qualified to take part are aged over 65 and are classed as ‘frail’ as they have any three of the following criteria: low levels of handgrip strength, unintentional weight loss, low levels of physical activity, slow walking speed, and self-reported exhaustion.

They will be measured before and after the study to assess their physical, psychological, cognitive, emotional and social health, as well as their immune function. They were selected at random to either take part in the resistance training group or a ‘control’ group which will receive their usual regular care throughout the duration of the study.

Over six weeks, those in the resistance training group will complete three to four training sessions per week, with each training session lasting approximately 35 minutes. There will then be follow-up measurements six weeks after the sessions have taken place to assess if there have been ongoing positive health benefits, and interviews with the participants and care home staff to get their opinions on how they felt about the intervention.

“Additionally, physical activity interventions have been suggested as potentially offering the best form of treatment for frail older adults, affecting both mental and physical well-being.

“We recently found that exercising together increased feelings of connectedness among older adults and we hope that this study will also show these benefits of physical activity as part of a group, as well as positive effects on health.

“If this feasibility study proves practical it will lead to a larger clinical trial that could provide valuable evidence to change the way we care for older adults to improve their long-term health and well-being.”

Professor Janet Lord, of the University of Birmingham’s Institute of Inflammation and Ageing, said: “The message that exercise is man’s best friend has been lost over time and we are an increasingly sedentary society. We hope this new study will show that encouraging exercise, even in an elderly frail population, is a viable solution to the problem that we are living longer but not healthier.”