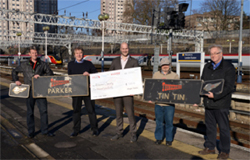 This wonderful and unique fundraising event has raised £5,000 to help people affected by dementia,

Run in association with The Railway Magazine, Britain’s number one railway title, the auction of both Parker and Tin Tin nameplates raised over £4,000. With an additional contribution from Virgin Trains, a cheque for £5,000 was presented to Jamie Anderson, whose father Gerry was the creator of the popular television programme Thunderbirds.

Speaking at the event, Jamie said.

‘My Dad did a great deal to support Alzheimer’s Society in his final year with us and believed it to be incredibly important that we raise awareness of dementia and help people understand that it is a condition that can happen to anyone.

‘There are 800,000 people living with dementia in the UK and 1 in 3 of us over the age of 65 will develop this incurable disease. So it’s vital that we do what we can to raise funds to support and care for those living with dementia and also fund research that hopefully will one day find a cure.

‘Alzheimer’s Society was a huge help and support to my Dad and the rest of the family so I’m delighted that the money raised from the sale of the Thunderbirds plates will support their vital work. It seems like such a fitting tribute!’

Joining Jamie at the event at London Euston were the lucky winners Melvyn Smith and Steve Davies (photographed).

‘Alzheimer’s Society does such fantastic work up and down the country helping both patients and families to deal with the effects of dementia. Gerry was very supportive when we originally came up with the idea of naming our trains after the characters from Thunderbirds so it felt only right that we should donate any monies raised from the sale of the nameplates to such a worthy cause.’

‘It was a fantastic gesture from Virgin Trains to have donated the nameplates and we were only too delighted to help. The response from our readers was overwhelming and we like to thank them for their support.’