Published today, the 2013-2014 edition of LaingBuisson’s annual Healthcare Market Review calculates that revenues generated by independent sector providers in the 12 health and care market segments it monitors stood at £40.5bn in 2012/13 (2011/12: £39.9bn)

While there have been some gainers and some losers, the grand total of £40bn is not significantly different from the previous year, reflecting subdued private spending out of disposable income and budget constraints amongst NHS and council purchasers of health and care services. 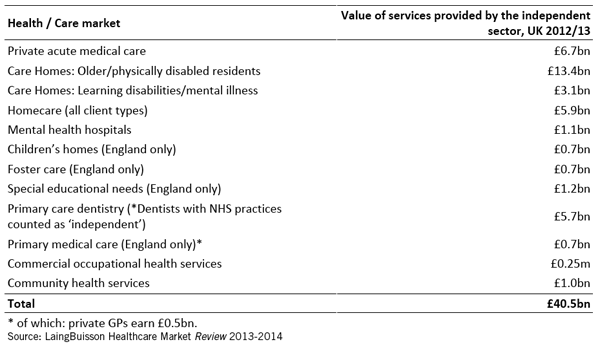 ‘Independent healthcare is still feeling the repercussions from the 2008 global credit and ensuing recession. Private demand for hospital treatment has been flat for five years, and private demand for care homes for older people has only kept growing because of the expanding older population and because private payers fund long term care out of assets rather than disposable income.’

Tight public sector budgets mean more outsourcing 2013 witnessed a continuation of the established outsourcing trend across nearly all publicly funded segments of health and care services – as illustrated for selected markets in Table 2 (below).

‘There are two drivers of this broad-based outsourcing trend, which has been in progress for more than three decades in some segments: Cost (e.g. for care homes and homecare, where public sector costs are up to double independent costs on a like for like basis); and Choice (e.g. in elective surgery and special education, where both Labour and Coalition administrations have sought to give individual consumers options other than public sector provision).’

The 26th edition of LaingBuisson’s Healthcare Market Review includes twelve chapters giving unique market insight into the full range of health, care and special education services in which independent sector providers have a significant presence, plus chapters on:

– Private medical insurance, which is the principal funding source for private hospitals;

– The growing role of Private Equity in UK healthcare, identifying the health and care companies that each of them backs.

– The political and regulatory environment in which independent providers operate

The work also includes Laing’s Directory – a fully comprehensive listing of provider organisations, insurers, hospitals and clinics, plus a financial directory of up to 5 years’ statutory accounts for over 300 of the largest providers currently operating.