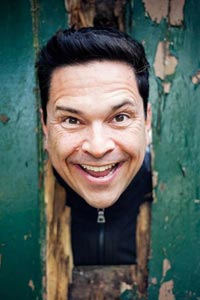 TV star Dom Joly has talked of the “great care” his aunt has received at a Cheltenham care home.

The Trigger Happy TV comedian visited Astell Residential Care Home in Overton Park Road for its second annual beer festival on Saturday. His aunt, 90 year old Marjorie, has lived at the care home for the past 10 years.

He praised the home for its dedicated care, hospitality and unique ideas, including starting the beer festival for its residents and families.

Dom, 45, who lives near Brockhampton, about eight miles east of Cheltenham said: “I absolutely love this place, they have even set up a bouncy castle. Putting elderly people in a care home can sometimes get a bad image, but this is honestly, such a great place. This is one of the really good ones, and they have taken great care of Auntie. It’s just incredible that they would set up a bouncy castle and hold a beer festival for the residents. What a great idea.”

Joining Dom and the 36 residents from Astell were people from other Lilian Faithfull Homes around Gloucestershire and their loved ones. More than 100 families came to the event, with a range of real ales and ciders on offer from Morton Brewery.

Barbara Wilson, registered manager at Astell Care Home, said the comedian regularly visited his aunt at the home and they thought it was a good idea to have him kick off the festival.

She added: “It was very nice of him to do so. The residents here normally get very excited about the beer festival. We did it last year, and everyone told us what a great idea it was, so we decided to have another one this year.”

All proceeds and donations on the day went towards the home.