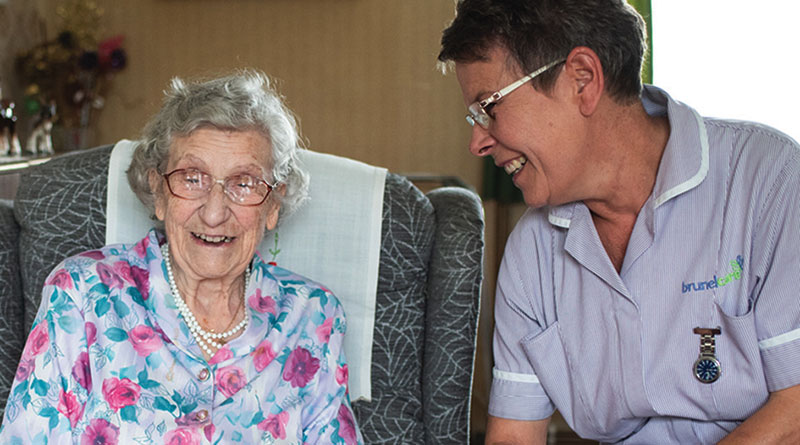 In recent years mindfulness has become a hot topic, becoming increasingly popular as mental health awareness grows. The reported benefits of practicing mindfulness range from improved mental and physical health, to reducing chronic pain, to facilitating recovery from illness. A study has found that depression and anxiety affects 1 in 5 people, with mental health being even more common in later life, so it’s vital that the invisible disease is recognised and treated as though it were a physical one.

Brunelcare is a Bristol based charity which has been providing housing, care and support for older people in the South West for over 75 years. Karolina Nowadczy has been working with the charity for 12 years and has trained to become a counsellor, obtaining a level 4 qualification in Humanistic Counselling, a therapy that focuses on a person’s individual needs and a level 5 in Cognitive Behavioural Therapy, a therapy that can change a person’s mental health problems by altering the way they think and behave. Since 2017, she has been helping residents, colleagues and families of residents learn mindful techniques to help bolster their mental health and well-being while in care.

How to practice mindfulness in care

Using mindfulness with residents on a one-to-one basis is extremely beneficial and Karolina has seen first-hand how it can minimise stress levels and promote well being. Going back to basics with simple breathing techniques, one resident who had advanced dementia found that mindfulness was quite a release. Karolina said: “I was helping her with breathing exercises so she could relax and reduce her anxiety, she continued to practice this on her own and we saw a real change in her well-being.”

Another project had a huge focus on residents who are living with anxiety. The goal here was to minimise their use of antipsychotic medication, drugs used to manage psychosis, schizophrenia and bipolar. To do this Karolina did a number of activities, one was bringing in animals for the residents to meet. It’s been scientifically proven that animals can help with depression, anxiety, and stress as well as providing great companionship. Following the session a reduction of stress levels and anxiety was noticeable in the care home.

Touch is also very important for residents who are living with dementia yet are cognitively impaired. Karolina would offer soothing hand and foot massages to relax and ease the residents that were not able to hear her mindfulness teaching.

Another group previously ran by Karolina is a Cognitive Stimulation Therapy session. This session helps people with mild dementia and stimulates engagement. This is a therapy that focuses on a different topic each week for several weeks to help improve the mental abilities and memory of residents with dementia. Karolina said: “After seven weeks of running this session a resident with dementia was able to remember what he needed from the shops for the first time in 12 years. It was truly fascinating.”

She is also passionate about training staff to manage their own well being, stress and workload, so they feel happier in the workplace. Karolina said: “It’s important to teach them to look after themselves while they look after others.”

Practising mindfulness techniques such as Cognitive Stimulation Therapy, one-to-one breathing sessions alongside socialisation has helped alleviate anxiety and stress and promote the well-being of residents. Mindfulness has helped Brunelcare residents minimise the use of antipsychotic medication and helped the residents living with dementia remain calm and relaxed. It’s estimated that 85% of older people (65 years old and above) receive no help at all for mental illness, something that needs to be addressed in care.