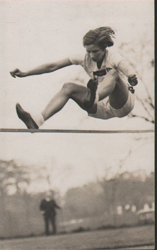 Born in 1912 – when King George V was on the throne – Sanctuary Care home resident Enid Watkins will celebrate turning 102 next week.

Enid, who has lived at Haven Residential Care Home in Pinner since April 2013, will celebrate at a party with family, friends, fellow residents and the care home team on Thursday 23 January at 4pm.

On 23 January 1912 Enid Clementina was born at the Vicarage in Frithlestock, Devon. She was the youngest of five brothers and sisters. Sadly, when Enid was just two years old and her oldest sibling just seven, her father passed away. After this happened, the family moved to Exmouth.

Aged 14, Enid attended St Margaret’s School in Bushey, before going on to attend Leeds University where graduated with a 1st Class Honours in Botany. Enid was a keen athlete and she took part in a wide-range of extracurricular activities, including being Captain of the Netball team, Lacrosse Team and Athletics Team. She also represented the university in the Amateur Athletics Association Games in Turin, Italy, in 1933.

After graduating Enid worked as a Botanist at ICI, where she met her husband John Watkins. They shared a similar love of sport and athletics, as John was a keen swimmer, rugby player and water-polo player. The couple married in 1936 and had two children: Philip, born in 1939, and Kay, born in 1943.

During World War II John was in the Home Guard and Enid was looking after their children and volunteering in the WVS, helping to organise the local Meals on Wheels service and blood transfusion sessions. Recalling the two most significant historical events in her life, Enid said:

“Remembering the days both World Wars ended is quite something. I remember at the end of World War I – I was just six years old and my sister and I were sent home from school. We all rejoiced!”

In the 1960s John became Managing Director of ICI Ireland and the family moved to the Wicklow Mountains in County Dublin, a remote and beautiful area where Enid enjoyed creating a fantastic garden and keeping Shetland ponies. In 1987 Enid and John relocated to the fishing village of New Quay in West Wales, where they lived until John sadly passed away aged 90. Enid then moved to Pinner to live near her daughter, Kay.

When asked the secret to reaching such a wonderful age, Enid said:

“A simple lifestyle and good genes – my mother, sisters and aunts lived well into their 90s. We never over-indulged and we did not drink, smoke or stay up late!”

“I also attribute my longevity to spending a lot of time in the garden, living in the countryside and walking in the fresh air in beautiful remote places. My favourite quote is: ‘You’re nearer God’s heart in a garden than anywhere else on Earth’.”

“Enid is a wonderful lady who still takes an interest in all that’s going on in the world and gets involved with what she can, including recently penning a lovely poem with a fellow resident. We’re all really looking forward to celebrating such a special birthday with her.”