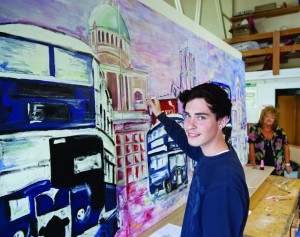 Berkeley House care home has installed a specially created piece of art to help residents remember Hull as it used to be in the 1960s.

The huge painting on boards – around 5ft tall by 14ft wide – was created at Wilberforce College by student Reece Parsons in his second year of a BTEC graphic design course.

Anne Bond, manager of Berkeley House said: “We first contacted the college, which is just down the road, last year to see if anyone would be interested in working with us.

“We wanted to design a large artwork which would help some of our residents who have dementia to remember the city in the 1960s.”

Roger said: “Working with real clients is really beneficial for students as it gives them an idea of what’s expected in the commercial design world. We’re pleased to build projects like this into courses if we can.”

Berkeley House chose Reece’s design, which shows some of the landmarks of 1960’s Hull – such as the Tower cinema which became a night club – and local transport to go forward to be scaled up to full size.

Reece said: “For me, the mural project was an exciting and huge challenge! Not only because I have never experienced working on such a large scale, but also because of the thought behind it.

“I admired the idea that the mural could benefit people with dementia by helping to bring back memories. It has been great to add my own signature and style to this painting. It has also been a great experience and a pleasure to know that my work will help others.”

Reece painted the work in one of the studios at the college over several months on three boards.

“We’re so delighted with it and the interest it generates that we’ve asked the college to come up with designs for another project about shopping,” said Anne Bond.