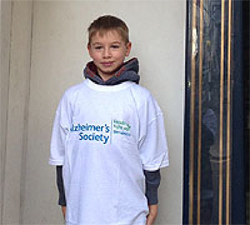 Over the last year Springview Residential Home have raised almost £7,000 for Alzheimer’s Society through a variety of fundraising activities.The latest of these was a 7.5 mile sponsored walk in London

‘My Name is Cameron and I am 10. Three years ago my great grandma was told she had Alzheimer’s disease, and so when I heard my Mum was doing a walk with Springview Residential Home for the charity I asked her if I could join her to support my great grandma.

On the day I thought I would never be able to walk the 7.5 miles when I realised I was the only child taking part, but, there was so much to see and learn about London that time went quickly and I took lots of photos to remind me of the walk. When I finished it I felt tired but thrilled, and texted my Dad straight away to tell him my news, he was very proud of me. I would do it again and tell others too as well.’

Over the last year, staff at Springview Residential Home in London, have raised almost £7,000 for the Society through a variety of fundraising activities. However as well as the committed staff and residents, no-one has shown as much dedication as Cameron Bradford. Cameron is only 10, but has showed a commitment beyond his years by taking part in a 7.5 mile walk around London, organised by the staff at Springview as part of their generous fundraising efforts for Alzheimer’s Society.

Unfortunately Cameron is one of the many people in the UK who has been affected by dementia with his great grandmother being diagnosed three years ago. Joining his mother Claire and 16 other supporters, together they trailed through the streets of London taking in the historical sites and helping to raise awareness of dementia.