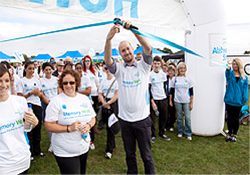 The fundraising event is expected to have raised over £30,000 for people with dementia and their carers, contributing to a nationwide target of £2 million.

After enjoying an energetic ‘Jazzercise’ warm-up, walkers embarked on 2km and 10km routes around the beautiful lake, which played host to the 2012 Olympics and Paraolympic Games. Upon their return, they were entertained by circus performers and live music from singers, Nicole Street and Joe Boshell.

Jamie started the walk as a tribute to his father, who had dementia and passed away in December 2012, aged 83. Jamie said:

‘I attended the Windsor Memory Walk last year and it was great to return to Dorney Lake today and set walkers off. Dad did a lot to support Alzheimer’s Society in his final year with us and I know he would have wanted me to continue raising awareness of dementia.

‘Today’s Memory Walk was a wonderful day out and a nice opportunity to talk to others who truly understand. I feel lucky to be part of an event which raises so much money for people with dementia and their carers – long may Memory Walks continue!’

Mark Reilly from Old Windsor was taking part in the 10km walk for his mum who lives in Staines and has dementia. His sons, Ciaron (five) and Cillian (five months) came along to support him. Mark said:

‘Mum was diagnosed with dementia earlier this year. My dad is the person who has been affected the most as he is now her main carer. I’ve been surprised by the amount of people who have suddenly come out and said they have a family member with dementia. They never told me before as I think it’s like mental illness in a way – there is still stigma attached to it. That’s why I decided to take part in Memory Walk today – to raise awareness.’