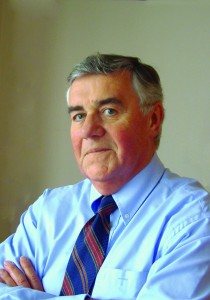 The team at Saniflo Ltd and the remainder of the SFA Group UK is honouring the life of former Saniflo UK managing director, Paul Newson, who passed away on 20 January 2014 after a seven-year battle with cancer.

Married to Mary in 1970 with one daughter, Paul’s family instinct generously spilled over into his professional life where he forged long-lasting relationships with his team and the trade. Being part of a privately-owned business, there has always been a family feel within Saniflo under Paul’s leadership.

Much loved and hugely admired for his strong ethics, humble demeanour and sharp business acumen, Paul began his career in the marketing department of Hoover and then later moved to the export department of Black & Decker before masterminding the launch of Saniflo in the UK in 1979, initially working alone.

A passionate and highly effective communicator, Paul spent over 30 years dedicated to the cause of building the Saniflo brand in the UK to become the market leader that it is today

Not averse to taking risks and investing heavily in marketing during the toughest times, Paul always pre-empted what the UK market needed and how best to provide it. It’s thanks to that foresight and a great testament to his legacy that Paul helped to not only continuously grow the market in the UK but also helped to bring international success to the SFA Group.

Saniflo UK managing director Tim Pestell adds: “Paul created this business from nothing in the UK – developing an unknown concept and product into the success it has become today. Not only was he a shrewd businessman, but a kind and humble man who always managed to bring out the best in others. He is greatly missed.”