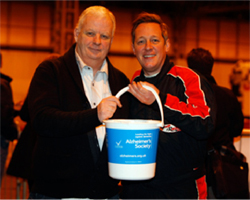 Motorsport champions revved up their engines in memory of IndyCar Champion Dan Wheldon at the Autosport International Karting Challenge (10 January) whilst raising awareness and funds for the Society.

Coronation Street Star, Tony Hirst, took part in the race pushing pedal to the floor for the charity.

For the second year running, the race, newly named the Dan Wheldon Karting Trophy, celebrates the life of two-time Indianapolis 500 winner and former IndyCar Series Champion who lost his life in an incident in October 2011 at the age of 33.

‘I’ve personally seen the impact dementia has on a family so, as an autosport enthusiast and a big fan of Dan Wheldon, I was delighted to be taking part in the Karting Trophy in memory of Dan and in aid of Alzheimer’s Society.

‘As a motorsport fan living with dementia, I’ve thoroughly enjoyed being at the Dan Wheldon Karting Trophy event in aid of Alzheimer’s Society.

‘I was here last year and it’s such a great experience. I hope that today’s event is even more successful in raising vital funds to support a charity that has made a huge difference to my life and many others across the country.’
Jo Wheldon, the sister-in-law of Dan Wheldon, said:

‘As a family, it so important to us to be able to keep Dan’s memory alive by doing something that he loved and raising money for a charity so close to all of our hearts.  The Dan Wheldon Karting Trophy captures so much about Dan, extremely competitive but hugely fun and we hope everyone involved feels the same.’

In celebration of his life, the family and friends of Dan Wheldon provided one of Dan’s trophies to the winning team, Team Avago.

‘It’s fantastic to see so many racing champions rallying together in support of the Autosport International Karting Challenge. We’re delighted that the Wheldon family has chosen to support Alzheimer’s Society through this special event in honour of Dan Wheldon. Money raised will help improve the lives of people with dementia today, whilst we find a cure for the condition tomorrow.’

Donations can be made to Alzheimers Society through the Dan Wheldon Tribute Fund by visiting alzheimers.org.uk/danwheldon