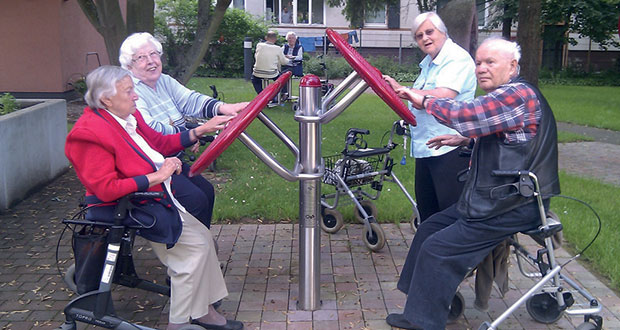 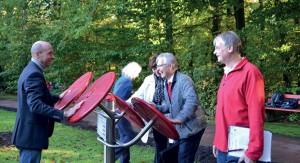 In the last few years outdoor-gyms have become increasingly popular and can be found in parks and other public spaces across the UK.

Initially, these installations were simply seen as adjuncts to childrens’ playgrounds thereby allowing parents to exercise while keeping an eye on their kids at the same time.

But these trim-trails soon came to be regarded as separate facilities in their own right and used either as part of existing sporting activities (e.g. by joggers etc.) or as an incentive for the less athletically inclined to at least get some exercise.

German manufacturers playfit® were pioneers in this field: set-up in 2006, the company’s philosophy was to make attractive, high quality and, above all robust, stainless-steel “designer” equipment: functional and easy to use and to cater for a wide variety of users.

playfit® soon realised that there was a potential for this type of equipment at other types of locations and for other kinds of user groups as well – specifically, as a preventive healthcare measure particularly for senior sports and for promoting active and healthy ageing. 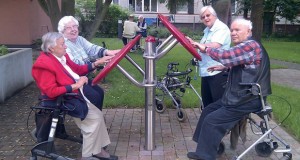 Of a total of more than 900 locations where playfit® equipment has been installed so far, approx.120 are to be found in residential care homes: operators consider the equipment to be a good way to upgrade existing facilities, providing an incentive for residents, staff and visitors to go outdoors e.g. into the home’s communal garden areas many of which were previously often under-used.

playfit® then decided to go one step further: by participating in, and in some cases initiating, case-studies at various types of facilties and in different environments. The benefits from regular exercising on the equipment were to be explored more thoroughly and on a scientific basis.

The following projects are just a few examples in which playfit® has participated:

• A three-month study in 2012 (“Exercise for Health in Old Age“) initiated by the Hesse Ministry of Social Affairs in conjunction with the Sports Medicine Department at Frankfurt University. About 50 participants aged 60-90 took part in twice-weekly exercise classes under trainer-supervision on playfit® equipment in a public park in the city of Hanau.
• A study on promoting exercises in senior-homes across Germany (2013)
• Studies on the potential benefits of exercising on playfit® equipment for people suffering from dementia (2013) at a care home in the city of Darmstadt and (2015) at a care home in the city of Magdeburg in conjunction with the Institute of Sports Science at the University of Magdeburg.
• Study at a rehab facility for people suffering from depression (2014 Oberursel, Germany) 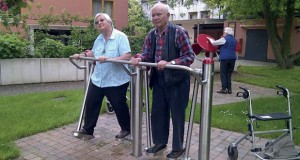 The dementia studies are of particular interest given the enormity of the problems associated with this condition taken together with the demographics of an ageing population.

The initial demantia project, lasting 3 months in 2013, was carried out at a nursing home for the elderly at the Klinikum Darmstadt in co-operation with playfit®: its aim was to record the participants’ physical abilities, their social interaction and to assess their subjective well-being when using the equipment. Every Tuesday, weather permitting, a training session took place in the clinic’s gardens under supervison of a qualified trainer. A total of 19 participants, in groups of six people per session on average did exercises on four pieces of playfit® fitness-equipment.

The results were encouraging. For example, using a set of questions to try to assess their reactions objectively, the patients appeared to enjoy these sessions especially when operating the machines’ moving and revolving parts. As the equipment is easy to operate and accessible, people with reduced mobility could were also able to have a try.
The more recent study in a care home in Magdeburg, to be published shortly, came to the conclusion that using playfit® equipment under supervision did seem to have the effect of stabilising the patients’ physical condition even over a relatively short period.

It is, of course, well-documented that exercising in general will be beneficial for dementia patients: but in this context playfit® equipment can be seen as an important tool for care-homes to encourage patients to take part in physical activities in a novel and interesting way while, at the same time, providing a focus for group activities
Last, but not least: playfit® has also developed a new indoor-series to cater for residents who are less mobile or for exercising indoors when the weather is bad (Details available on request).