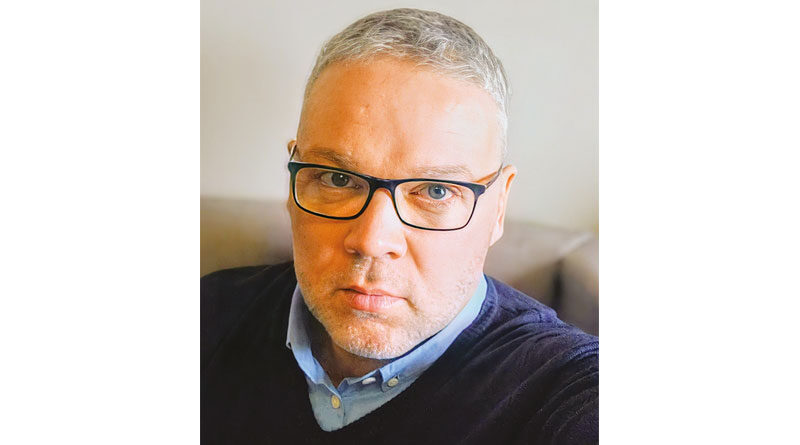 I want to tell you a story of an extraordinary young man. His name was Oliver. The tale I am about to share with you was originally written by his parents, Paula and Tom, and if you want to read it in full, please visit Oliver’s Campaign website.

Let me begin by telling you about Oliver. Oliver was not an aspiring captain of industry, a political leader, a writer or a painter. Nor was he a musician, an actor, or a celebrity with a large social media following. Nevertheless, Oliver McGowan was exceptional.

Oliver was remarkable because despite developing hemiplegia, epilepsy, a mild learning disability and later on a diagnosis of high functioning autism at an early age, he saw the best in everything and everyone. He never let his disabilities stunt his ambitions.

Against the odds, Oliver passed his GCSE and BTEC examinations. He went to college. His academic talents were matched by his sporting achievements. He was an extremely accomplished athlete.

But, perhaps one of Oliver’s most rewarding moments came not in the classroom, or on the sports field, but in the sterile surroundings of his neurologist’s office. It was there that Oliver was given the uplifting news that he would be able to live a normal independent life with only a little support required.

Medication
But, tragically, after suffering from a series of partial facial seizures, he was admitted to hospital. A raft of tests were carried out and Oliver was sent home. However, bizarrely, the doctors prescribed antidepressants, when he wasn’t depressed. The side-effects of the medication led to Oliver suffering more seizures and when he returned to hospital a few months later, the doctors elected to prescribe anti-psychotic medication, despite Oliver showing no signs of mental illness or psychosis.

At this point, Oliver’s parents became very worried. They believed that his doctors had failed to take into account the fact that he was autistic and were therefore in fact prescribing entirely the wrong medication. It was only when a bed in the psychiatric ward could not be found that the doctors decided to stop administering the anti-psychotic medication. Once the drugs were out of Oliver’s system, his mood greatly improved and he had far fewer seizures.

Seizures
However, a further bout of seizures meant another hospital stay, where Oliver was again prescribed anti-psychotic medication, despite the fact that the negative side effects had been recorded in Oliver’s medical records. Again, Oliver’s mood deteriorated and his seizures increased.
Hospital staff did not understand Autism or Learning disabilities

A stay in a specialist adult hospital yielded no better outcome. The hospital staff did not understand Autism or Oliver’s Learning disability, nor did they listen to Oliver’s parents or a Learning disability nurse. Instead of getting to the root of the issue, doctors prescribed anti-psychotic medication, while the staff used physical restraint, which made Oliver feel scared and isolated.

After yet more seizures, Oliver was admitted to a different General Hospital. He was intubated and developed pneumonia. Astonishingly, despite it being written in red ink on his medical records, and Oliver stating to doctors that he did not wish to take anti-psychotic medication, doctors gave it to him anyway. The seizures continued, but now they were much worse than they had ever been. Oliver’s parents asked the doctors to conduct a brain scan. His doctors initially refused, but two days later they changed their minds and sent Oliver for a scan. The neurosurgeons diagnosed Neuroleptic Malignant Syndrome, a side effect of taking anti-psychotic medication.

Oliver was now paralysed, he could not speak, eat or drink without a tube and was on a life support machine. A week later, Oliver’s family had to make the awful decision that no family should ever have to make. With a heavy heart, they gave the doctors permission to turn off Oliver’s life support machine.

Campaigning for change
Having experienced so much grief, anguish and sorrow, Oliver’s parents, Paula and Tom, were determined that nobody else should have to suffer like Oliver did. His death had highlighted a terrible truth to them. It demonstrated that the vast majority of social and health care professionals did not understand autistic people with comorbidities, nor did they know how to support them.

Having supported individuals with Autism, Learning disabilities and complex needs for many years, I have seen the monumental struggles that they and their families face. Often those in secure services are misunderstood. Like Oliver and his parents, they are constantly fighting the system to receive the right support.

Doctors and care workers supporting people with Autism and Learning disabilities fail to grasp the complexities of the condition. Too often, the personality disorders and obsessive behaviours that are sometimes associated with Autism and Learning disabilities, lead to them being wrongly sectioned under the Mental Health Act, when their needs should be met through the Autism Act 2009 and the Equality Act 2010.

Campaign for better training
Paula decided to take action to right this wrong. She is very much a trailblazer and took it upon herself to lead the campaign for better training. Soon after Oliver’s death, she set up Oliver’s Campaign and has dedicated her life to championing the rights for autistic people and those with Learning disabilities. One of her greatest achievements to date has been to impress on government ministers the importance of her campaign. The UK government responded by commissioning the Learning Disability Mortality Review Programme (LeDeR). As a result, health and social care staff in England receive a package of training around Learning disability and Autism awareness.

The training now available to social care has been transformational. In 2021, the Oliver McGowan Mandatory Training in Learning Disability and Autism, was trialled in the health and social care sector. Under new government requirements, all Care Quality Commission (CQC) registered providers must ensure that employees receive learning disability and autism training appropriate to their role.

CQC requirements don’t go far enough
However, in my role as a consultant to Quality Compliance Systems (QCS), the leading provider of content, guidance and standards for the social care sector, I believe that the CQC requirement is far too vague. It leaves too much room for interpretation in my opinion, and in doing so, potentially puts those with autism and learning disabilities at unnecessary risk. I believe the guidance should be changed. Instead of stating that employees should receive training “appropriate to their role”, it should go much further and include anybody who comes into contact with a person with Learning disabilities or Autism as part of a wider training programme.

When I worked as a Registered Manager in Supported Living services, I extended Autism and Learning disability training to encompass everyone in the service. It paid off too as it gave non-clinical staff such as handymen, cleaners and administrators, who were in regular contact with the service users, the confidence to observe and report anything to frontline teams that they considered unusual. I found that creating a wider circle of support was not only hugely effective, it visibly improved the safety and the wellbeing of service users. Moreover, this approach paid dividends with friends, families and anyone else in the person’s support network. It meant that they had a much better understanding of that individual’s needs.

Training
But, compliance aside, there is a much bigger point around best practice to be considered too. With the CQC requirement now incorporated into the Health and Care Act 2022, a code of practice that would standardise training has yet to be published. However, there is no shortage of training available for providers.

BILD, which was formed by Professor Gerry Simon in 1971, with the aim of creating a society where everyone could enjoy the same right and opportunities, offers over 20 different training programmes.

NAPPI UK, which trains workers in non-abusive psychological and physical intervention, offers a number of workshops, while the Restraint Reduction Network, which actively campaigns to reduce the reliance on restrictive practices and ensures that people’s human rights are respected and protected, is another invaluable training resource.

The Restraint Reduction Network Training Standards apply to all training that has a restrictive intervention component. It is a national and international benchmark for training workers in education, health and social care settings to support people who are distressed.

But, perhaps one of the most invaluable training resources is STOMP. When you consider, according to Dimensions, that even after Oliver McGowan’s death, over 35,000 people with learning disabilities and autism are still being inappropriately prescribed psychotropic medication, STOMP, which stands for ‘Stopping Over Medication of People with a Learning Disability, Autism or both with Psychotropic Medicines’, is a resource that every provider should embrace.

Closely connected to the inappropriate prescription of anti-psychotic medication is the incorrect placement of people with Autism and Learning disabilities in Assessment and Treatment Units (ATUs). A decade has passed since Winterbourne View scandal, which exposed “a systematic failing to protect people or to investigate allegations of abuse”.

If there is one positive to come out of the scandal, it was the Transforming Care programme. It aims to improve care and services for people with Learning disabilities and Autistic people by reducing inappropriate admissions and length of stay for those in ATUs and secure hospital settings.

Despite the creation of the Transforming Care programme around 2,000 people with Learning disabilities and Autism remain trapped in long-stay settings.

If we don’t understand Autism and Learning disabilities, we cannot provide the right support
The key question that providers must ask themselves is who is coming into the service, what is their life history and what are their needs and requirements? This information needs to be documented and recorded in the initial assessment and forms the foundation for a person-centred care plan, which should be constantly updated as the person’s journey in the service progresses.

Crucial to the process is not just understanding the often complex needs of the service user, but also knowing how those individual needs are going to be addressed. That means creating a training matrix, underpinning it with analysis, and supporting care planning and training policies.

QCS
QCS, the organisation that I consult for, has created this key infrastructure so that providers can embed a robust and highly effective culture of training and learning into the services they manage.

Providers should reflect on additional training over and above Autism and Learning disabilities that is required when supporting individuals with supplementary needs and health conditions. Those include communication, epilepsy, mobility, medication and where needed (in some cases) restrictive practices, which are driven by person-centred care and positive behaviour support principles. In short, there is so much more required when providing training based on the needs of individuals. Most importantly, this needs to be built into an organisation’s training needs and analysis plan.

For Oliver, tragically, the comprehensive package of training that services now have access to, came too late. However, his family can take comfort from the fact that their tireless campaigning and activism has changed social care for the better. At the very heart of this profound and lasting reform is a brave boy who saw only opportunity in every challenge he faced.

With special thanks to Oliver’s Campaign in documenting Oliver’s life story. If you want to read Oliver inspirational story in full, please click here: https://www.olivermcgowan.org/home

Additional resources
To find out more about how you can access QCS’s care planning and training policies and its Training Matrix, contact its compliance advisors on 0333-405-3333 or email: sales@qcs.co.uk.
Restrain Reduction Network
https://restraintreductionnetwork.org
BILD