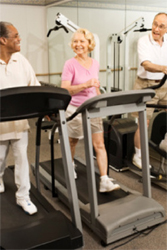 Local government can improve the health and wellbeing of their communities, and save money in the long-term, by encouraging people to be more physically active, says NICE.

Last week, new research revealed that in certain parts of the country rates of physical inactivity have reached “pandemic” levels.

The research, published in a report by ukactive, found that in some areas up to 40 per cent of the adult population can be classed as inactive, with 12.4 million failing to raise their heart levels for more than 30 minutes a week.

The figures raised concerns, as physical inactivity is known to increase the risk of developing long-term conditions such as heart disease, type 2 diabetes and certain types of cancer. It is also known to decrease a person’s life by up to five years.

On average, local authorities were found to have spent 2.4 per cent of their health budgets on tackling inactivity in 2013/14, compared with 38 per cent on sexual health services, 12 per cent on alcohol misuse services and 4 per cent on adult obesity.

The report consequently called on local government to rebalance its resources by prioritising physical activity services to the same level as other public health risks.

A range of methods that local authorities and partner organisations can use to make their communities more physically active can be found in NICE’s local government briefing on physical activity.

Examples of effective recommendations include ensuring that there is a local network of paths for walking and cycling, promoting active travel to schools, colleges and workplaces, and providing green spaces and play areas for children that stimulate and challenge safely.

For built environments, new developments should be designed to encourage physical activity, and stair use should be encouraged through clear signage and stairwells that are well lit and decorated.

The briefing also includes a table that poses a range of questions that could be asked to help develop an action plan.

NICE estimates that taking such measures can also save costs, as they will address the estimated £6.5 billion per year loss in productivity per year from sickness absence and premature death.

For example, physical activity programmes at work have been found to reduce absenteeism by up to 20 per cent, and physically active workers take 27 per cent fewer sick days.

In addition, walking and cycling instead of using cars or public transport can help reduce associated costs of poor air quality, congestion and collisions in urban parts of England. Estimates suggest these that together these cost society around £10 billion per year.

Professor Mike Kelly, Director of the Centre for Public Health Excellence at NICE, said: “The ukactive report highlights the growing problem of physical inactivity and the fact that resources have not been directed to target this issue in certain parts of the country.

“Our physical activity briefing features a range of practical measures that local authorities and partner organisations can take to encourage their communities to be more physically active.

“These evidence-based recommendations are designed to help local government make best use of its limited funds in improving public health. They are practical, cost-effective measures that will not only improve the health and wellbeing of their communities, but lead to cost savings in the long-term.”

Fred Turok, Chairman of ukactive, said: “It’s no longer acceptable that physical inactivity remains the forgotten cause of death in the UK. More deprived areas are faring worse in a physical inactivity pandemic, with no national strategy to improve our fitness levels, from before we take our first steps to our last.

He added: “If we are to turn the tide, Councils, government, and health and leisure providers need to work together to get more people, more active more often.

“Supporting inactive people to become more active, even for just 10 minutes a day, is where the biggest health gains lie.”