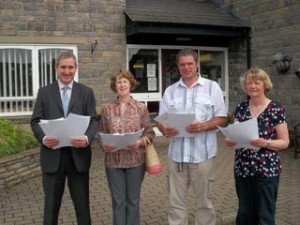 Greg Mulholland, Member of Parliament for Leeds North West, which includes most of Yeadon has written to the Leeds City Council Scrutiny Board asking for the Council to overturn their decision to stop admitting new residents to Suffolk Court Care Home in Yeadon. Greg has been working with the local Otley and Yeadon councillors and the Save Suffolk Court campaign, run by families and friends of residents and supported by the local community.

Leeds City Council Executive Board voted on 4th September to close the Suffolk Court Care Home and to sell it to the NHS to become an intermediate care centre, for short stays for people who had been in hospital before returning home. This would mean no Council run care home in Yeadon and residents only able to access private homes, many outside Yeadon itself.

Leeds City Council have so far indicated that current residents of Suffolk Court would not be asked to leave, but no new residents would be admitted, meaning a lengthy transitional period whilst council care home residents would share the facility with intermediate patients cared for by the NHS. Following some confusion over the Council’s position expressed by families of residents, Greg Mulholland is also asking Leeds City Council for a clear guarantee that the current residents will be allowed to stay for as long as they wish and would not be pressurised to leave.

“I am and always have been strongly opposed to the closure of Suffolk Court care home, a vital asset for older people in my constituency. I urge the Scrutiny Board to take on board the evidence that has been put before the Council and overturn their decision to stop admitting new residents. I am not convinced that the campaign to save Suffolk Court has been listened to.

“Closing the care home to new admissions will reduce the quality of life for existing residents who enjoy the community atmosphere of Suffolk Court and the conversion to an intermediate care centre will mean that care provision may no longer be suitable for long term residents further down the line.

“It also concerns me that older people in my constituency who are looking to plan for their future will no longer have the option of residential care at this local, well run and successful care home, forcing them to look further afield and only in the private sector, which takes away choice.

“This entire process shows the lack of joined up thinking between Leeds City Council, the Hospital Trust, and health commissioners. The option that Wharfedale Hospital wards could be used for intermediate care beds has not been properly considered and it should be.”

“I am concerned that the decision to stop admitting new patients to Suffolk Court amounts to closure by stealth.

“Whilst Leeds City Council have said publically that no residents will be moved, if you look closely at the closure conditions set we could be in a position where residents could have to move as early as January.

“In January the NHS can put in an application to begin converting the facility into a specialist clinical intermediate care centre and residents may face being moved temporarily whilst building work takes place. Will residents then want to move back after this work has finished?

“I am concerned that residents who think they are safe to stay at Suffolk Court may eventually have to leave.”