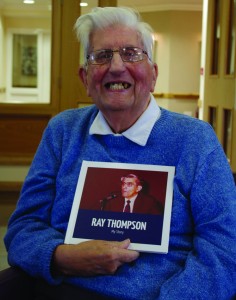 Great train robber, international drugs trafficker and arms dealer – these are just some of the people that Care UK respite resident Ray Thompson has been mistaken for in his 85-year life.

There have always been logical reasons for the challenges and they were often related to his role as a physicist travelling the world wherever his work took him.

Ray’s first role was to learn all the detail of fuel production in the atomic energy factory at Springfields near Preston before moving to the nuclear reprocessing site Sellafield. He later worked with a team developing a heat seeking missile at de Havilland Aircraft Company and when that project was completed he switched to developing the use of modern technology in industry.

Ray met several of the leading American engineers working on the Apollo moon landing project, while on a course at the George Washington University in America, and came home to design the power system for the first British space satellite.

He helped British Rail modernise locomotives and signalling and dealt with the oil company Esso when they were updating super tankers.

Some of Ray’s stories have been recorded in a book just published called Ray Thompson – My Story. Two copies are for his grandchildren and he hopes they will take on board a message that will help them cope with ups and downs in life.

He has taken many knocks of his own but his story is about the way he has risen above them to achieve great things and now to be happy in retirement.

Ray lives in Herstmonceux with his wife Ruth, who sadly is in hospital at the moment, daughter Gill and her son Lewis, 19. Ray also has a son, Paul, who is married to Jackie and they have a daughter Charlotte.

Ray was thought to be a great train robber by a hotel waitress who overheard him discussing with colleagues the need to take measurements at a railway track one evening.

At the time he was working on British Rail projects and it was fortunate that when the girl told her manager of her suspicions he spoke to the group before the police were called.

The greatest accolade for Ray was being asked, in 1980, to chair a conference in London of academics and industrial engineers from all over the world.

As he arranged the conference he was called to Denmark for a meeting only to be disturbed by two armed policemen hammering on his hotel room door demanding to know his name.

He was suspected of being a drug baron by the name of Thompson, known to be on his flight from England, and they took some convincing that he was not the person they wanted.

Looking back Ray says the Second World War years tripped him up in different ways.

He was born and growing up in Tottenham when uprooted at the age of 11 and evacuated with his mother to Norwich where they stayed with an elderly woman who didn’t want them there and shooed them out of the house after breakfast each morning and wouldn’t have them back in until the evening.

They two were eventually relocated to Trowbridge in Devon where he came top of his class and was anticipating receiving a school prize but he was disappointed when it went instead to a local lad. As an evacuee Ray was considered an outsider.

Later Ray was invited for an interview for a place at Cambridge University but literally blew up his chances by causing an explosion while working on one of the tasks he was set. “I must have done something wrong,” he said.

He was then offered a place at Birmingham University only to be told at the last minute that it was instead going to an ex-serviceman – they were being given priority at the time.

The turning point came when an old school friend suggested he contact South West Essex Technical College and he studied there for an external London University degree.

Ray was prompted to write his book while on a respite break, with his wife Ruth, at Care UK’s Bowes House care home in Hailsham.

As part of the respite package, the team discusses and compiles a ‘life history’ with each resident. This allows them to understand residents better and gives residents the opportunity to talk about their life and its events.

Everyone was intrigued by Ray’s tales and encouraged him to go further and publish a memoir. He and his daughter Gill spent hours writing and re-writing until eventually it was ready to be published.

They have since taken the finished book to Bowes House where it is being passed around and enjoyed by the team and other residents.

Ray said one of the things his publishing company asked him was what was the highlight of the past few years? His answer was “Bowes House being built”.

He and Gill said it is a “wonderful place”. They had watched it being built as they drove past and he and his wife Ruth had thoroughly enjoyed their stay while Gill, their carer, took a break.

The family often call in now for lunch, or to watch a film with residents, or take part in other events on the home’s social calendar.

Gill says that her father is a quiet and modest man but he says that he was helped immensely throughout his life by one of the people who interviewed him for his first job who stood tall, looked down on him and said: “Young man, if you don’t blow your own trumpet, no one will blow it for you”.

He says: “That is a piece of advice I have given out to many others, and by the way, I got the job.”

Ray has very much enjoyed blowing his own trumpet by writing his book and he is delighted when people take an interest in it and in his life.

Perhaps one day there will be a second edition because Ray says he has lots more stories to tell.