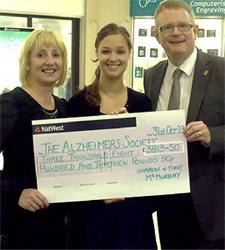 During this busy year of celebrations owner Sharon McMurray, supported by her husband Tony, successfully raised funds for the Alzheimer’s Society for which Tony is a long standing fundraising volunteer.

As in the past, Sharon and Tony kicked off their fundraising efforts with their annual Tea Dance held in the Town Hall. Unlike previous years when Tony has put himself through a variety of physical challenges, this year the fundraising focused on one main event titled ‘The Kings Night’ held at Whittlebury Hall in July.

Co-organised by Sharon and another Towcester fundraiser Pamela Jennings, the £7,627 raised was split 50:50 between Alzheimer’s Society and Life Education Northants for whom Pamela fundraises.

Last week Sharon and Tony handed over a cheque for £3,813.50 to Danielle Hindle, Alzheimer’s Society Community Fundraiser, at a get together in Northampton.

‘Thank you so much for your fantastic donation. It was lovely to meet you and it was wonderful to meet such dedicated and passionate supporters. I look forward to working with you on the future.’

‘This year was full of celebrations with the 10th anniversary of my business. The Kings Night was full of fun and fantastic music by Alvin who always delivers a great mix of Comedy and a tribute to Elvis.’

No sooner had Sharon handed over the cheque for this year’s fundraising than she is well on the way to putting her plans in place for 2014.

Sunday 16 March 2014 will once again see the annual Charity Tea Dance held in the Town Hall for what will be its 10th anniversary. With the usual mix of dancing, cream tea or coffee for £5, tickets can be purchased now from the Tea Rooms on 01327 358200. A Raffle will also add to the days fundraising.

Learning from the success of this year’s event, the big music fundraiser next year is to be a fun packed event showcasing some of the countries great singing talent.

On 4 May and 5 May 2014 Sharon has booked The Bell Hotel in Winslow for exclusive use over the two days. She has secured the services of 8 different acts including Barbara Streisand, Amy Winehouse, Freddie Mercury and the King of Rock and Roll himself, Alvin as Elvis. The event will be titled ‘A Weekend with the Stars’ and with only 38 hotel rooms available a number have already been taken.

Sharon said of next year’s event:

‘I have been busy, with Alvin, booking the venue as well as the acts. The marketing literature is looking great and the acts are now booked so we just need to get the hotel filled. May Day weekend is promising to be a fun packed, entertaining and most of all a fundraising charity event. As with all our events, this is completely self-funded and all monies raised will be donated through the local Alzheimer’s Society. I will be making sure everyone has a great time.’