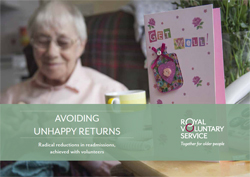 Almost 150,000 older people have had no support on returning home from hospital and for those that did get some kind of help, a fifth (approximately 20 per cent) didn’t receive essential continuing support, warns our research released today.

Older people can be especially vulnerable and frail following a stint in hospital and it is particularly important that they are supported to manage health conditions and stay independent to prevent readmission. Currently 15.3 per cent of over 75s are readmitted within 28 days of discharge [1] putting stretched accident and emergency services under more pressure.

The frailty of older people on their return home from hospital, is confirmed by the research conducted by research company PCP on our behalf, which reveals that 23 per cent of older people in Britain discharged after an overnight stay said that they felt very vulnerable when they came home and eight per cent did not feel able to look after themselves.

However, with the right and often very simple and inexpensive support, readmissions can be dramatically reduced. Since the establishment of the Royal Voluntary Service Hospital 2 Home scheme in Leicestershire in 2012, over 600 older people have been supported, with very low readmission rates to hospital among those who used the scheme (seven per cent within six weeks).

Read our report Avoiding unhappy returns, a summary of the achievements of Hospital 2 Home service in it’s first year.

Comparatively, nationally, our research found that just one in five older people received support through social services or the hospital. In the absence of a formalised discharge care plan, the vast majority of respondents, over 90 per cent, received help from a family member or friend.

However, previous research from Royal Voluntary Service found that changes in family structures and circumstances, such as divorce and relocation, raised concerns about the availability of family support for older people. The same study found that 15 per cent of respondents aged 85 years and older lived more than 40 miles apart from their children.

“Leaving hospital and returning home can be a stressful and worrying time for older people who may be particularly frail. It is vital that they have continuing and co-ordinated support at this key time. As well as appropriate medical and social care, support offered by volunteers, such as those that provide our Home from Hospital service, plays a vital role in helping older people settle back at home and can prevent unnecessary readmission back into hospital. We know that these services are not only good for older people’s quality of life, but they also provide wider economic benefits to health and social care services and the community.”

Research shows two-thirds of people admitted to hospital are over 65 years old [2] and readmissions within 30 days carry a cost to the NHS of 2.2 billion per year [3]; Royal Voluntary Service is calling on hospital trusts to work with the charity and similar organisations, to make the transition from home to hospital easier through schemes such as Home from Hospital.

Royal Voluntary Service Home From Hospital schemes support people over the age of 55 over a period of six weeks after a stay in hospital by helping with nutrition, transport and integration back into the community. The service enables prompt hospital discharge, as well as reducing isolation and increasing independence and overall well-being in older people on their return home.

Overall, the charity supports over 100,000 older people each month to stay independent in their own homes for longer with tailor made solutions. Through its army of 40,000 volunteers, the charity runs services such as Good Neighbours (companionship), Meals-on-Wheels and Books-on-Wheels that alleviate loneliness and help older people. Royal Voluntary Service also provides practical support for older people who have been in hospital through its On Ward Befriending and Home from Hospital services.