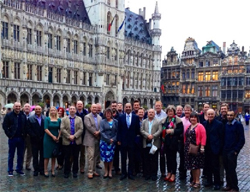 The chairman of a care group based in Accrington helped to take the challenges facing small business in Lancashire to Brussels.

Ken Nolan, chairman of the Springhill Care Group, was able to discuss some of the issues for the business community in the region when he and a small group of other business leaders met with Sajjad Karim, Conservative MEP for North West England.

The group – led by Tony Raynor of Abbey Telecom, Blackburn in collaboration with the North West Chamber of Commerce and the Federation of Small Businesses – were able to discuss the amount of red tape which they say often hinders the ability of small business particularly in times of recession.

Ken said: “Karim was very supportive and is spending a great deal of time in this area trying to reduce the amount of bureaucracy facing small business. At this time of difficulty, it is especially time-consuming for smaller businesses to ensure they meet the requirements of all of the legislation coming out of Brussels affecting health and safety, employment or operational issues.

“We were also able to understand more about the European Parliament process, its working practices and the work by our MEPs. I would like to thank Sajjad as well as other members of our group for a constructive visit.”

Sajjad Karim continues to spend a considerable amount of his time working towards a reduction in EU regulations and red tape on businesses, particularly SMEs.

In October 2011, he was appointed as the European Parliament lead on a new report that will look at improving the law-making process across the EU and reduce the legislative burden.