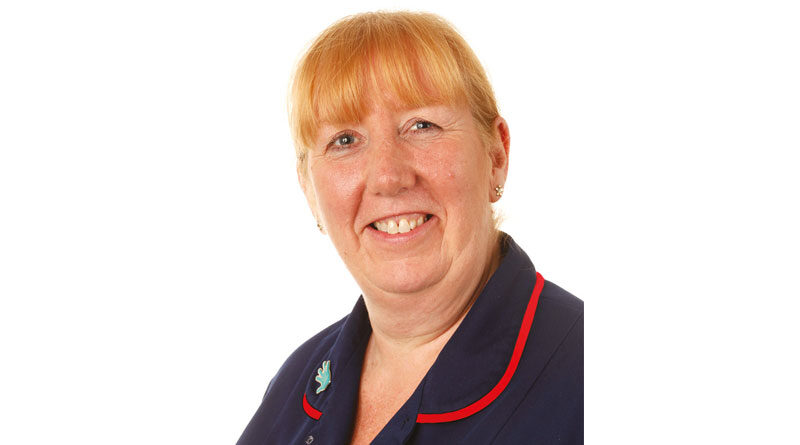 Introduction
In the transfer of an NHS Trust from one disinfectant to another, there are many factors to consider from ease of use to efficacy against healthcare-associated infections (HCAIs). For many years, Doncaster and Bassetlaw NHS Trust (DBTH) used a chlorine dioxide (ClO2)-based product as their universal, one-application, quick kill rate disinfection solution. When the supplier announced it was to cease production, they had to find a replacement solution. Whilst scoping the market, it was found that most trusts were using chlorine-based disinfectants or a different brand of ClO2-based disinfectants.

Most other solutions were complicated in their mechanism or required a cleaning and disinfecting clean (two stage), which would be time consuming. Information was sort from the Infection Prevention Society (IPS) to see what products were commonly used throughout the country and this is where DBTH were informed about Peracide™, an in situ peracetic acid (ISPAA)-based disinfectant. After further discussion with the company, it was agreed that a trial should take place to confirm the claims of the product. The product was introduced to the microbiologist and Director Infection Prevention & Control (DIPC) our Facilities management team and Health and Safety advisor.

The process of using the product needed to meet the needs of facilities and Health and Safety, and the approval of the DIPC that the product had a successful kill rate to reduce HCAIs. DBTH did plate assays to ensure its efficacy and when satisfied, trialled Peracide™ on two wards to test its efficacy and ease in use.

In recent years, the need for rapidly efficacious, high-level disinfectants has increased as HCAIs have become a significant issue. HCAIs negatively impact the patient recovery, turnover and average cost by increasing the length of patient stays, increasing costs associated with care, increasing pathogenic effects and increasing the risk of spread to another patient.

Materials and Methods
As an alternative to a ClO2-based disinfectant, Peracide™ was selected. Peracide™ is a broad-spectrum biocide, reacting to produce peracetic acid in-situ which is a high-level disinfectant that boasts strong, oxidizing properties. Peracide™ is extremely effective against a wide range of healthcare-associated pathogens including spore forming Clostridium difficile, MRSA, Norovirus, Legionella, E. Coli, Pseudomonas etc. and will work to destroy established biofilms. Peracide™ is both safe to use and environmentally friendly and is suitable for high level sanitising and disinfecting on porous and non-porous surfaces. Unlike other disinfectants, Peracide™ is minimally affected by organic matter. Upon breakdown Peracide™ is completely biodegradable producing carbon dioxide, water, and oxygen.

Two side rooms on the same ward were selected. The occupants were of similar admissions reasons and neither of which had any alert organisms so did not occupy the room for isolation purposes

Results
Cleaning had not been performed on either side room with Peracide™ prior to this test. The results show that the ClO2-based disinfectant showed no effect at the intervals measured. 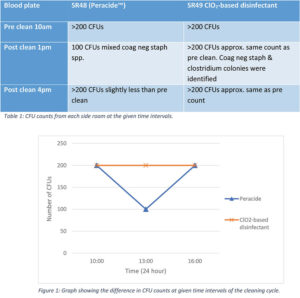 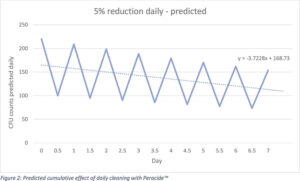 This emphasises the absolute importance of regular routine cleaning and shows that Peracide™ is effective both in short- and long-term use.

Discussion
Overall, it was found that the ClO2-based disinfectant was almost entirely ineffective and was not suitable for use. There are many possible reasons for this. It could be a case of error in preparation as the formulation can be difficult to use correctly, or that the solution was no longer efficacious as there is no indicative mechanism for the user. It may also be an issue with the ClO2-based disinfectant in solution. ClO2 exists as a gas which readily diffuses out of liquid solution, with a diffusion coefficient of 0.145cm2s-1 at room temperature (Lee, Burgess, Rubino and Auras, 2015)

On the other hand, Peracide™ was considerably more effective and had lasting effect in a high-traffic environment. Peracide™, coming in a simple tablet form, is easy to use, is indicative of efficacy and is stabilised in solution. This accumulates to an easy to use, visibly efficacious disinfectant with cumulative effect that supports long-term infection control.

Acknowledgements
Thank you to the participants at DBTH for engaging in this trial, and to the laboratory team who performed the necessary assays.