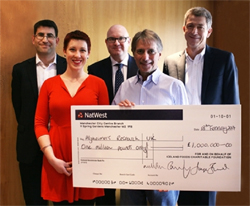 The Iceland Foods Charitable Foundation presented a cheque for £1 million to Alzheimer’s Research UK on 25 March, bringing its total fundraising efforts to £3.1 million. This incredible result is due to a nationwide effort by the frozen food giant’s staff during a three year charity partnership with the UK’s leading dementia research charity.

Alzheimer’s Research UK was chosen as Iceland Foods Charitable Foundation’s lead charity in April 2011 and the partnership has continued for three years. All the money raised is making a major contribution to dementia research, supporting studies into early-onset Alzheimer’s, which can affect people under the age of 65. The research is focusing on improving diagnosis and understanding the risk factors connected with the disease.

Iceland’s Chairman and Chief Executive Malcolm Walker CBE kicked-off the fundraising in 2011 in spectacular style with a daring Iceland Everest Expedition with his son Richard. The following year the intrepid Iceland chief attempted to trek to the South Pole. Then in 2013 he published his autobiography, Best Served Cold: The Rise, Fall and Rise Again of Malcolm Walker, generously donating proceeds of the book to Alzheimer’s Research UK.

Following their boss’s inspiring example, Iceland’s 25,000 enthusiastic staff went all out to raise money in a whirlwind of activities. Between them they climbed the highest mountains in Scotland, England and Wales and one of the highest in Northern Ireland. They took part in sponsored cycle rides, marathons and family walks, showed huge strength in lorry and coach pulls, jumped from planes in skydives, filled wellies with custard – and much, much more.

“I am extremely proud of everyone at Iceland for raising an incredible £3.1 million. The commitment of our staff, customers and suppliers has been outstanding – they’ve gone to great lengths to support Alzheimer’s Research UK’s vital work. It’s fantastic to know that this amazing total will bring the charity ever nearer to achieving its aim of defeating Alzheimer’s disease and other forms of dementia.

“Working with Alzheimer’s Research UK during the three year charity partnership has also given us a great opportunity to raise awareness. With 830 stores on busy high streets nationwide, we’ve reached countless members of the public with the message that dementia research needs more funding.

“Alzheimer’s disease has had a profound effect on my own family and on those of so many of our colleagues and customers; indeed, it is hard to find anyone who has not been touched in some way by the huge epidemic of dementia that we are currently seeing. It’s a disease that doesn’t discriminate and in rare cases it can affect people in their 50s, 40s and even in their 30s. I am delighted that the money we have donated will go directly to research that will give hope to people living with Alzheimer’s disease today and future generations.”

“It has been a great pleasure working with the Iceland Foods Charitable Foundation. The £3.1 million raised through the Foundation is a major contribution to research into Alzheimer’s disease. We have been so impressed by the dedication of Iceland staff and their inventive fundraising ideas, including Malcolm Walker who literally attempted to walk to the end of the earth to raise money for us in his trek to the South Pole. We are hugely grateful to everyone for their outstanding support.

“The colossal sum raised through the Foundation is supporting seven world-class research projects, including a large study into early-onset Alzheimer’s led by Prof Nick Fox and Dr Jonathan Schott at University College London. Early-onset Alzheimer’s can strike at such tragically young ages and the team of scientists is following a group of people with the disease over time. They aim to learn more about its causes and how it develops. The results of these studies have the potential to revolutionise our understanding of Alzheimer’s and other forms of dementia and improve the design of clinical trials for new treatments.

“There are hundreds of thousands of people across the UK living with the daily reality of Alzheimer’s disease and other dementias. Dementia poses one of the greatest threats to public health now and in the future but funding still lags far behind other serious diseases. We rely on donations to fund our crucial work and support from businesses like Iceland Foods plays a key part in helping us progress our world-class research.”

“Early-onset Alzheimer’s is particularly cruel, affecting people at a time when they may still have young families and careers. This incredibly generous support from the Iceland Foods Charitable Foundation is a tremendous boost to our research. It gives us a real opportunity to understand why and how the disease affects some people decades earlier than others and could provide clues to finding the treatments so urgently needed.”

Further information about Alzheimer’s Research UK is available by calling 0300 111 5555 or online at www.alzheimersresearchuk.org