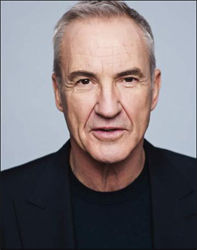 Independent Age and Barchester Healthcare are thrilled to announce that one of Britain‟s most accomplished stage and screen actors, Larry Lamb, is to host the Older People in the Media Awards ceremony this November.

While Larry qualifies for his OAP Freedom bus pass he proves that reaching 65 is no barrier to finding new work or growing his already huge fan base. Larry has starred in numerous TV series including Gavin & Stacey and EastEnders and, most recently, he teamed up with Alison Steadman for ITV‟s new comedy drama Love and Marriage and hosts his own three hour programme on LBC 97.3 every Sunday morning.

The Older People in the Media Awards 2013, are organised by older people‟s charity, Independent Age, and care provider, Barchester Healthcare, and aim to shine a light on coverage which has either positively portrayed older people or sensitively highlighted the issues they face.

The 2013 Awards follow the success of our inaugural awards last year, whose winners included BBC1 Controller, Danny Cohen for his groundbreaking season of BBC1 documentaries, When I’m 65, Dame Maggie Smith for her feisty, funny portrayal of the Dowager Lady Grantham in Downton Abbey, plus a host of regional outlets which have worked hard to bring older people‟s issues to the fore.

This year‟s event will be taking place at a special awards ceremony in central London on 19 November and the categories are:

7. Best older person‟s character in a film, TV or radio drama (Gransnet special award, voted on by the readers of Gransnet)

8. Best use of photography to illustrate older people‟s issues

9. „The Thorn Award‟: Worst example of stereotyping, factual error or misleading information in the coverage of older people‟s issues

Chief Executive of Independent Age, Janet Morrison, said: “We are absolutely delighted Larry Lamb is joining us to host the awards this year. His wide-ranging career from radio, TV, film and theatre and diverse roles such as Mick in Gavin & Stacey, and Archie in EastEnders will bring great insight to the awards and their recognition of the talents of mature role models.”

Trish Morris-Thompson, Director of Quality and Clinical Governance at Barchester Healthcare, said: “It is through listening to the individual needs and thoughts of older people in today’s society that communities can best care and make a meaningful impact on the lives of this generation and those that will follow. The media plays a huge part in forming the views of the nation and I am very proud that Barchester Healthcare and Independent Age are able to celebrate the journalistic excellence that brings these issues to the forefront of the news agenda and will help to improve the levels of independence, dignity and choice available to us all.”