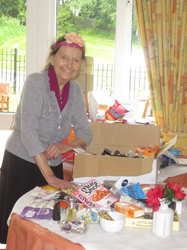 Residents at St Marks Court in Gateshead have supported UK soldiers serving in Afghanistan by sending the troops shoeboxes full of useful and tasty gifts.

The residents and members of staff at St Marks Court were touched when they received a lovely letter from one of the soldiers thanking them for their kind efforts. In his message the soldier commented: “My team and I could not possibly thank you enough for all your efforts! Morale was drastically increased yesterday when your parcels arrived” and “people such as yourselves are the true heroes back home- without you our lives would be so much harder. You made a lot of soldiers, miles from home, smile yesterday. Be proud of yourselves.”

Located on Split Crow Road in Deckham, Gateshead, St Marks Court care home provides nursing care, including dementia care, for up to 60 elderly residents. The home has 60 single bedrooms, all en-suite, and a bar and gardens for its residents and visitors to enjoy, including a vegetable garden.

St Marks Court is part of Akari Care and aims to maintain lifestyles as similar as possible to those enjoyed at home, with an extensive range of activities which individuals can enjoy and benefit from.

Nikki Coulson, Manager at St Marks Court, said: “The residents thoroughly enjoyed being involved with Operation Shoebox UK, which was a great way for us to show our respect and thank the soldiers for the sacrifices they make every day. As several of our residents are ex- servicemen, this project was extra special and encouraged the residents to reminisce and discuss their personal experiences.

“The letter we received thanking us for our parcels meant a great deal to the residents to know that their shoeboxes had been received and had brought a smile to the faces of some of the troops- it left many of us with a lump in our throats!”