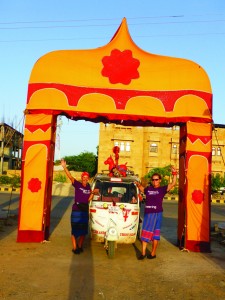 Courageous fundraisers Fiona Lees-Millais, from Haltwhistle in Northumberland, and Nic Manners, from Banbury in Oxfordshire, have raised an enormous £14,000 for Alzheimer’s Research UK after travelling more than 3,000km across India in a rickshaw. Fiona, 51, and Nic, 50, were motivated to support the UK’s leading dementia research charity after seeing close family members battle with dementia.

The friends, who were the only all-female team to take part in the Rickshaw Run challenge last month, led a procession of 80 rickshaws as they set off from the starting point in Shillong in north-east India. Tasked with finding their own route west to Jaisalmer, the pair navigated huge potholes, pushed their way through cow-filled streets and narrowly avoided tipping over while off-roading – all in a tiny three-wheeled auto-rickshaw with an average speed of 35kmph. Travelling distances ranging from 250km to 600km a day, the duo managed to be the third team across the finish line, eight days after the start of their journey.

Nic, a teaching assistant at Carrdus School in Banbury, said:
“I don’t think I really knew what I was letting myself in for when I signed up for the challenge, and it didn’t really hit me until we first landed in India. I’ve never done anything like it in my life before, and it was completely bonkers, but I’m so glad I did it.

“One of the highlights was stopping at Varanasi and visiting the sacred River Ganges. We were inspired to do this challenge because my mother-in-law died with vascular dementia earlier this year and Fiona has a close family member with Alzheimer’s, so we lit candles, scattered flowers on the river and said a prayer for them. We saw the sun come up there, and I felt my mother-in-law was there with us on our journey.”

Fiona, who is known to her friends as Fo, added:
“I’d taken part in a Rickshaw Run once before, so I had an idea of what to expect, but every day we had new adventures. It was chaos at the start when all 80 rickshaws were setting off, but when most of the other rickshaws stopped for the night we kept going, and after that we never saw another team. Most mornings we were on the road by 5am, and it was wonderful to watch the sun rise and India come alive around us.

“We were lucky enough to meet so many wonderful people who helped us along the way, and being with Nic was brilliant – she really kept my spirits up. Every time we got into difficulty or something went wrong we would just laugh our way through it, and of course knowing we were raising money for Alzheimer’s Research UK made it all worthwhile.”

Miranda Johnson, Head of Corporate and Community Fundraising at Alzheimer’s Research UK, said:
“What an amazing challenge! We’re so grateful to Fiona and Nic for taking on this incredible journey to support dementia research. The amount they’ve raised is enough to pay for hundreds of hours of research or crucial equipment, bringing new treatments, preventions and improved diagnosis ever closer.

“Hundreds of thousands of people are affected by dementia across the UK, and we urgently need treatments that can tackle the diseases that cause it. Research is vital for new treatments to become a reality for the people who need them, and it’s thanks to people like Fiona and Nic that we’re able to fund our pioneering research.”

To add to Fiona and Nic’s fundraising total, visit www.justgiving.com/2hot2handle-alzheimer – or to learn more about fundraising for Alzheimer’s Research UK, contact fundraising@alzheimersresearchuk.org or 0300 111 5 777.