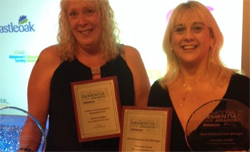 It was a night of double celebrations for two Four Seasons’ staff at this year’s National Dementia Care Awards.

Our Director of Dementia Care, Caroline Baker, was awarded the Lifetime Achievement Award in the final of the prestigious national awards.

Chairman and interim CEO Ian Smith said: “This is not only testament to Caroline’s body of work with Four Seasons Health Care – in particular her work in developing the PEARL accreditation with Pete Calveley and Prof. Dawn Brooker, – it’s a huge feather in our cap in the same week that we launched the new Commissioned Services business division and our ambition to be the No. 1 carer of choice.”

Our second winner in the Journal of Dementia Care sponsored Awards ceremony (held at the Colwick Hall Hotel, Nottingham) was Christine Smith, of Holybourne Day Centre, who won the Dementia Care Manager Award.

Caroline began her caring career in 1986 as a student nurse. She joined a charitable trust in 1993 as a Deputy Manager and then as a Home Manager, caring both for residents living with dementia and also residents living with an enduring mental health diagnosis. She joined Four Seasons Health Care in 2005, initially as Care Services Director, then became Dementia Services Director and is now Director of Dementia Care.

In 2008, Caroline embarked upon a structured project to systematically improve the quality of care for residents living with dementia within Four Seasons. Working alongside Professor

Dawn Brooker’s VIPS framework work of care, both Caroline and Pete Calveley were major architects in the development and rollout of the PEARL project (Positively Enriching And enhancing Residents’ Lives).

PEARL had a significant positive impact upon individual residents. These included; reductions in the number of falls, increases in weight of residents and increased well-being.

The biggest success has been that due to Caroline and her development of the PEARL project there has been a dramatically reduced amount of anti-psychotic medication prescribed to people living with dementia.

Caroline now sits on the Governments Anti- psychotic working group and the PEARL project continues to be rolled out . The Dementia Services Team within Four Seasons has also increased year on year across the UK as the benefits continue to be repeated.

It was a double-celebration for Christine, too, as she was presented with her 30 years’ long service award by Chairman Ian Smith. She started work at Holybourne in her early 20s as a carer when the centre was under Wandsworth Borough Council. Over time she progressed to Day Centre Manager. She says that Holybourne is her ‘baby’, as she hasn’t any children. Regional Manager Sheila King told us: “There are never any disciplinary issues in the day centre (she deals with issues as they arise), sickness is 0% and her staff team won the best dementia care team award last year.”