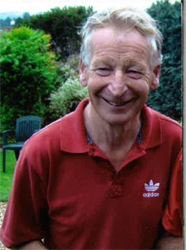 Alzheimer’s Research UK has received a gift of £279,933.00 from the late Michael Harnell who lived in Exeter all his life and spent his career with the Express & Echo newspaper. Michael passed away with motor neurone disease in November 2012, aged 73. He left the gift in his Will to the UK’s leading dementia research charity in memory of his mother Freda who died with Alzheimer’s disease 15 years ago.

Michael’s generous gift will make a major contribution towards a three year project funded by Alzheimer’s Research UK at the University of Exeter Medical School. Led by Dr Jon Brown, this study is looking at electrical signals in the brain to discover what happens when brain systems are disrupted by Alzheimer’s disease and other forms of dementia.

Greatly respected in his local community, Michael was known as a true gentleman. He was very sociable and ran the Exe Badminton and Tennis Club for over 30 years. He also enjoyed organising group activities such as walks and cycle rides.

The only child of Freda and Cyril, Michael was a former pupil of Hele’s School in Exeter. His father died 40 years ago of a brain tumor. Michael started his career with the Express & Echo in Okehampton and later moved to the Exeter office where he worked in the accounts department. He never married and when his mother became unwell he worked part-time to look after her but decided to retire when he was 52 to care for her full-time.

“My sister Margaret and I have very fond memories of Michael. He was a wonderful cousin and friend – no one had a bad word to say about him. He was a very thoughtful and generous man. He gave his time and support to many charities during his lifetime and remembered a number of them in his Will. But he never allowed himself any luxuries and lived modestly without many home comforts.

“When Michael’s mother Freda was first diagnosed wth Alzheimer’s she used to wander off and get lost and he’d get a call at work to come and get her. It was very worrying for him and he decided to give up his job to look after her. Caring for Freda was a huge task as she needed help with everything – washing, dressing and eating. But Michael was a devoted son, always patient and caring. The experience opened his eyes to the dreadful lack of funding for research for new dementia treatments. He left a gift in his Will to Alzheimer’s Research UK to give hope to other people.

“Freda didn’t know who Michael was in the end – she was so muddled she thought he was her mother. He did arrange for her to have respite care so he could have a break but she became even more confused and it made matters worse. So he decided it was better to keep her in her own routine at home. He arranged for someone to come and sit with her from time to time so he could enjoy his badminton and cycling.

“Margaret and I are very proud that Michael left a gift to Alzheimer’s Research UK to help defeat this devastating disease. And it’s fantastic that the research is being carried out in his home city of Exeter. Even though he’s no longer with us, it’s so good knowing Michael’s generosity and compassion are still making a difference.”

“We are extremely touched by Michael’s generous gift to Alzheimer’s Research UK, which will fund a major part of the dementia research project I am working on with my team here in Exeter. Alzheimer’s disease and other forms of dementia steal memories and wreck lives, putting an enormous strain not just on individuals but their families and a much wider network of people. Michael would have been all too aware of this having cared for his mother and our research aims to have a direct impact on improving treatment for people living with dementia.

“Through this study we aim to get a better understanding of how the complex electrical networks within the brain miscommunicate when affected by dementia. This will allow us to work towards targeting treatment more effectively in the future.

“We will use state-of-the-art recording devices to monitor brainwaves during tasks which trigger communication between the hippocampus and prefrontal cortex, which are both crucial for learning and memory.

“Initial studies have indicated that these areas of the brain communicate abnormally when too much tau protein is produced, which occurs in certain types of dementia, including Alzheimer’s disease.”

“There are hundreds of thousands of people in the UK living with dementia today, including over 12,000 people in Devon. Dementia poses one of the greatest threats to public health and there is a significant need for increased funding for research, which is why we are so grateful to Michael for remembering Alzheimer’s Research UK in his Will. Michael’s generous gift will contribute to a major dementia research project in the university city where he spent his life. It is cutting-edge research like this in Exeter that will lead us to the preventions and new treatments so urgently needed.

“We rely on donations to fund our pioneering work and gifts in Wills pay for one in three of our research projects. However big or small, these gifts allow ordinary people to make an extraordinary impact on our crucial dementia research.”