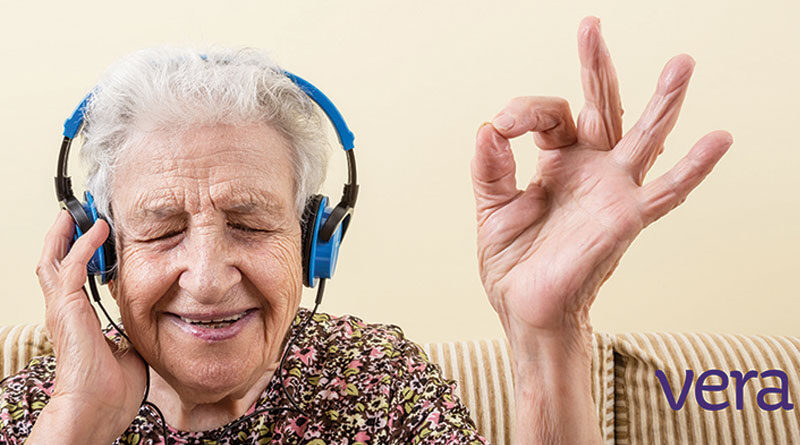 Vera is now approved by Apple for download via the AppStore in Australia, Canada, New Zealand, the UK and the USA, with the cross-sector Music for Dementia campaign welcoming the launch to help improve the lives of people impacted by dementia. The launch is the culmination of Music Health’s rigorous three-year development process which involved global research and development of the underlying technology that allows Vera to curate the perfect song at the right time for every individual listener.

The announcement follows the launch at Universal Music UK of the Power Of Music, a report from UK Music and Music for Dementia, which outlines a blueprint to use music to help transform communities and improve the nation’s health and wellbeing. It includes a commitment from Universal Music UK to develop a dynamic online resource which will serve as a music and dementia information hub.

Grace Meadows, campaign director, Music for Dementia, says:
“Research shows that music is much more impactful for people living with dementia when it holds meaning and is associated with moments from someone’s life. In our recently launched Power of Music report, which sets out how we can be harnessing the power of music more to support health and wellbeing, we emphasised the need for a personalised approach to embedding music in health and social care, and the Vera App helps carers to do that.”

The power of personalised music to affect a significant improvement in cognitive function for people in dementia care is evidenced by international scientists and neurologists, including award-winning neuroscientist and best-selling author, Daniel J. Levitin; the late physician, best-selling author and professor of neurology, Dr. Oliver Sacks; and Ronald Devere, M.D., director of the Alzheimer’s Disease and Memory Disorders Center in Austin, Texas.

Dr. Ren Minghui from the World Health Organization, says:
“While there is no curative treatment for dementia, the proactive management of modifiable risk factors can delay or slow onset or progression of the disease. I urge all stakeholders to make the best use of these recommendations to improve the lives of people with dementia, their carers and their families.”

Vera analyses the age of the dementia affected person, where they grew up, and how they react to certain music. It uses these criteria to autonomously curate the right songs at the right times to effectively manage the Behavioural and Psychological Symptoms of Dementia (BPSD).

More than 80 percent of people living with dementia experience BPSD, manifesting as agitation, aggression, depression, or confusion. Vera stimulates the part of the brain responsible for long-term memory to help manage the impact of BPSD, easing the care routine of those living with dementia. Listening to personally significant music – all the noteworthy songs from our own life – is shown to effectively decrease the effects of BPSD helping to improve mood, cognitive function, motor functions and brain plasticity.

With more than 20,000 hours of observation and rigorous analysis, combined with research from the Global Centre for Modern Ageing, confirms that Vera has a significant positive impact on the quality of life of people dealing with BPSD. While not a cure, Vera is a tool that can temporarily improve the cognitive function and mood of the person living with dementia making it easier to care for them.

Stephen Hunt, Music Health co-founder, says:
“We’ve built Vera to know and find the music that means the most and has the biggest effect for each person living with dementia. It acts like a music detective, that seeks out tunes that they used to love a long time ago but may have forgotten about, which their carers may have never heard of, and their families may not even know.”

Vera is a product of Australian collaborative innovation. Music Health credits Barossa Village, Dementia Australia, the Australian Department of Health and the Global Centre For Modern Ageing (GCMA) for helping realise the innovation since 2019.

The Department of Health provided a research grant in 2019, following Vera winning Dementia Australia’s Decoding Dementia competition.
“I’m thrilled that we’ve been able to bring Vera to market thanks to our amazing partnership with Universal Music Group and the many care home and researchers that have made it possible. It’s thanks to their early support for the concept that we’ve been able to deliver this foundational change to the daily lives of those living with dementia, here and around the world,” adds Hunt.

Michael Nash, UMG’s Executive Vice President of Digital Strategy, says:
“From rigorous workouts to peaceful meditation to restorative sleep cycles, music is deeply integrated into numerous innovations promoting health and wellbeing. Now, scientists are finding that music is also a powerful tool for helping those suffering from the effects of dementia and memory loss. At UMG, we are working with a wide range of companies to develop therapeutical applications of music and we ’re proud to partner with Music Health on Vera to help improve the lives of so many around the world.”

Barossa Village, an aged care organisation, worked with Music Health to refine the app and validate the impact Vera has on people living with dementia. This included daily monitoring of the changes Vera had on the people being cared for at Barossa Village as listening sessions were integrated into the daily routine of care. Findings from the studies showed an overall increase in quality of life for participants, especially after using Vera for several months. You can view a video of Barossa Village’s experience here.

“Vera provides playlists that are targeted and tailored to how each of our residents relates to their favourite songs. It’s an amazing innovation. And family members love it as they can participate in a shared experience with mum or dad, grandad or nanna,” says Matt Kowald, General Manager, Integrated Care at Barossa Village.

Vera is currently in trials with BUPA, an international healthcare company headquartered in the UK serving more than 31 million customers across the world, as well as several of Australia’s most innovative health and aged care providers offering hospital care, residential care and community services.

Vera is available in the U.K. for GBP £69.99 for a 12-month care plan.
Visit www.veramusic.com for further details.