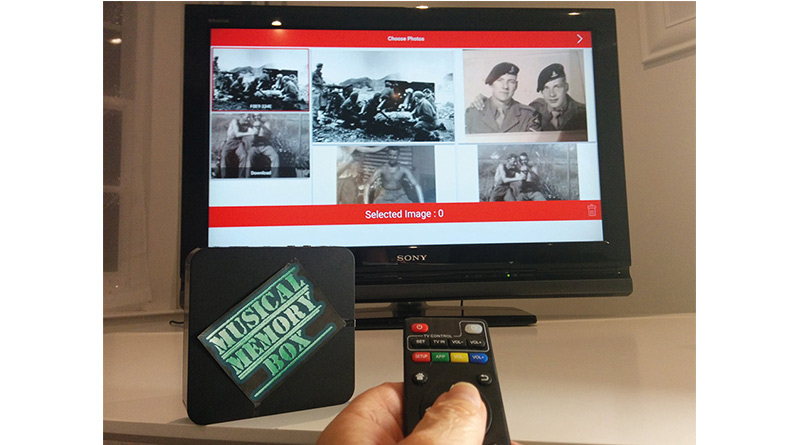 In 195O, David, aged 18, and his fellow National Servicemen, were fighting the Communists in Korea. What he experienced and saw, both good and bad, is deeply embedded in his memory. In particular he is able to recall the close relationship he enjoyed with his comrades.

David, now in his 80s, lives alone and has Dementia. His family have created a montage of photographs taken during his time in Korea, accompanied by popular music of the period to which he listened on Forces Radio. The music is a trigger which restores his memory.
As the numbers of older people affected by Dementia grows and the pressure on the Care Sector increases, it is inevitable that more and more older people will live alone or with family.

The sector is being warned to prepare for this:

The Silver Song Music Box system has proved very successful in group settings – care homes, dementia units, dementia cafes – but does not reach older people living at home who are lonely and socially isolated. To meet this need Sing For Your Life have developed The Musical Memory Box System.

This do it yourself kit has been developed to support older people who are living alone and lonely or with the family, and living with Dementia, Alzheimer’s, Parkinson’s and similar conditions.

The Musical Memory Box System stimulates memory and cognition by combining images of memorable events – christenings, weddings, graduation ceremonies, holidays etc with the music which was popular at the time – to create a personal video.

Images are photographed using a camera or mobile phone and downloaded onto an SD Card. Music and songs which were current at the time of the event are downloaded onto the SD card.

The Music Box is connected to the TV with an HDMI lead and is controlled using the remote control included in the kit.
Benefits of using the Silver Song Memory Box:
• The family can all take part
• Stimulates and restores cognition
• Improves communication
• Reduces Social Isolation & Loneliness
• Improves Health and Wellbeing
• Encourages & Supports Family Relationships
• Supports End of Life Care

Building on the success of the Silver Song Music Box which enables groups of older people to enjoy participatory singing, Sing For Your Life has developed The Silver Song Reminiscence self build system which provides cognitive stimulation for older people living at home alone or with the family.
The system costs £150 complete

The combination of photographs and appropriate music stimulates the release of endorphins which restore memory and comprehension thereby
reducing loneliness and social isolation.