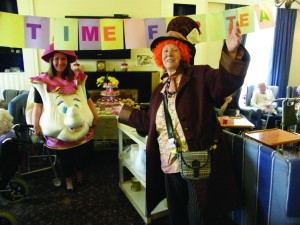 New Park House Care Home in Trentham, Staffordshire hosted two fun-filled events in support of NHS England’s ‘Nutrition and Hydration Week 2014’ (March 17th – 23rd). The aim of the week was to promote the motto “Little and Often”, encouraging the elderly  to ensure an adequate dietary intake to maintain good health by eating small amounts of food throughout the day as well as preventing dehydration by drinking small amounts of fluids on a regular basis.

Working closely with New Park’s Kitchen Manager Kim Newman, Lifestyle Coordinator Pat Phillips arranged ‘New Park’s Biggest Ever Tea Party’ on March 18th and a ‘Tutti Frutti Day’ on March 20th. The Tea Party invited residents from New Park and our sister home Haversham House, their families and the local community to join us for afternoon tea and cakes – as well as some fun! Kim and her staff cooked up a storm in the kitchen, making cup-cakes and other goodies to entice appetites and Kim later joined the party dressed as ‘Mrs. Pots’. Pat arranged a raffle with teatime hampers as prizes, decorated the main lounge with fresh flowers and old tea-time and food advertising posters to encourage reminiscence and acted as  master of ceremonies, dressed – of course – as the Mad Hatter from Alice in Wonderland. More than sixty people attended and all declared it was a success as well as great fun.

For our ‘Tutti Frutti Day’, once again Pat and Kim worked together. Kim sliced and diced platters of exotic fresh fruits – melon, mango and pomegranate as well as blueberries, grapes, oranges and kiwi – and she also blended fresh fruit milkshakes and smoothies. These were then put on a trolley decorated with pictures of fruit and hibiscus flowers which Pat – dressed in a colourful Hawaiian shirt and carrying a portable cd player playing Calypso music – visited residents with, encouraging them to sample the fruits and  drink the fruity milkshakes. Residents also enjoyed this event, so much so that a simliar Caribbean-style event is planned for Cancer Prevention Week’s ‘Fruity Friday’ on May13th