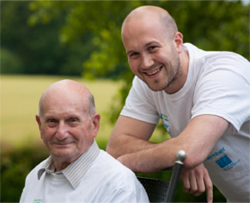 A moving documentary about Gerry Anderson’s life with dementia is being launched on Boxing Day (Thursday 26 December) to commemorate a year since he passed away with the condition.

Thunderbirds creator Gerry, who died peacefully in his sleep on Boxing Day last year aged 83, was diagnosed with Alzheimer’s disease in 2011, although he had been showing symptoms of the condition up to ten years before.

The documentary, commissioned by Fanderson (the official Gerry Anderson appreciation society), began filming in the summer before he passed away and features Gerry and his son Jamie talking candidly about the condition and how it was affecting their lives. It tells the story of Gerry’s dementia journey, from mistaking the early symptoms as ‘old age’, through to how they coped as a family and what it felt like for Jamie when his father no longer recognised him. He also reflects on their work supporting Alzheimer’s Society, and Gerry’s decision to donate his brain to dementia research.

Talking about the early days when he first started to notice changes in Gerry, Jamie said:

‘Mum and I just put it down to normal ageing and we kept making excuses. Even when he made soup with the dog’s antifungal shampoo, we still said “Oh well, it’s just a mistake, any older person could make it, it’s totally normal.”‘

Over time, Jamie and his mum Mary started to worry something was seriously wrong. Speaking about his diagnosis, Gerry said:

‘My wife dragged me [to the doctor’s], because I said “I don’t want to make a fuss, nothing’s wrong”. She took me to the local doctor who gave me a brief examination and said “We need to have a look at this more carefully in a hospital“. When they got the results it showed that I had, in fact, contracted Alzheimer’s.’

‘I live an hour and a half away [from Gerry and Mary]. I’m not here all the time, although I probably should be and there is certain a degree of guilt that I’m not here 24/7 because that’s what Mum has to deal with. In the last six months, he’s got really upset, anxious, aggressive, paranoid and all these are hallmarks of moderate Alzheimer’s disease. She’s had to deal with that every day, every night.

‘He now doesn’t remember that I am his son, and he has certainly lost the concept of a father-son relationship and what that means. He’ll quite often ask “Who are you?” to me.’

Towards the end of his life, Gerry decided he wanted to donate his brain to medical research to help find a cure for the condition. Jamie explained:

‘He said “I’m getting worse, I can feel I’m getting worse every day”. That was really upsetting to hear. He said “What can I do going forward?” and I said, “Well there are tissue donation programmes” and he said “Well, surely they should just have my brain then?”, which took me back a little bit.’

Gerry soon became too unwell to continue with filming. The final scenes show Jamie earlier this year, talking after his father’s death about the decision to move him into a care home, the impact of losing his father and what he hopes will be his lasting legacy.

‘His disease progressed so much quicker than any of us had thought. By December, he had to be moved up to a nursing ward for 24 hour care. I went and saw him on Christmas Eve, wished him a Merry Christmas, but by that time he was really not talking at all and not really aware of his surroundings. Unfortunately, I got the call on Boxing Day morning that he had died.’

‘Gerry Anderson has been an outstanding supporter of Alzheimer’s Society and campaigner on behalf of people with dementia. He was determined to spend the last year of his life speaking out for others living with dementia to ensure their voices were heard and their lives improved.

‘With the support of his family, Gerry tirelessly attended events around the country to raise awareness of the condition and to raise funds for a cure. The last time I saw Gerry was at the start of our annual Memory Walk in September 2012 where he was our guest of honour and star starter alongside Carey Mulligan. Gerry, accompanied and supported by his son Jamie, stayed to speak to the crowds, wave off the walkers and shake hands with the many friends and fans who had come to meet him.’

The link to the film will be available to from noon on Boxing Day. Visit