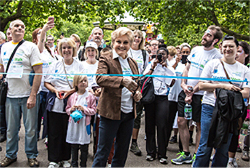 Well respected broadcaster Angela Rippon called upon hundreds of walkers to help end the stigma around dementia, as she kick started the Battersea Park Memory Walk on Sunday 22 September.

Angela, who is an ambassador for the charity welcomed walkers and said:

‘Everyone here today will have been touched by dementia in some way. This event is a terrific opportunity to raise thousands of pounds and help ensure Alzheimer’s Society can support people living with dementia and continue funding research. We need to do all we can to help, not just for those who have the condition, but their carers and family members. Events like this are very important, they take a huge step forward to ensure as a society we breakdown the stigma around the disease and show everyone that it is possible to live well with dementia.’

The walk in South London is expected to raise a massive £125,000. Many of the groups of walkers have made over £500 in sponsorship including Eileen’s Angels – a group of six women were there for their mum. Kate Wise, from Fulham, said:

‘Our mum has dementia and other family members have also had it. We are passionate about raising money for research for future treatments and to ensure there is support out there for those living with dementia. Raising the profile of the condition is also very important, it has such a huge effect on the whole family and I think it’s something the government needs to focus on, especially as people are living longer.’

A team of ten from South East London and Essex were also at the Battersea walk. Jeff Baker, from Sidcup said:

‘We are doing this for our granddad and nanny Grover who both have Alzheimer’s. We are doing this to ensure others can be supported through this difficult journey. We want to raise all we can to fund vital research and hope events like this help raise the profile of this difficult condition. We have already made around £600 and are hoping for even more.’

Around 700 people gathered at the start line at Battersea Park on Sunday morning.

Walkers enjoyed clear skies, delicious food and drinks and some entertainment in the form of Danny Foster and the Soul Corporation. The former Hearsay singer has been supporting the charity after a family member was diagnosed with Alzheimer’s.

Battersea is one of hundreds of Memory Walks to take place throughout September. For the third year, the event has been supported Bupa Care Services, the company is donating £2.50 for every walker who completes the final mile of the walk.

‘Today has been a great success with so many people here supporting Alzheimer’s Society. I would like to say a massive thank you to everyone who came down, the volunteers, the walkers and of course to Bupa Care Services for all their help.’