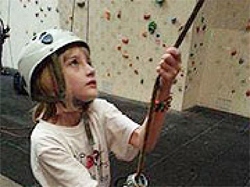 Imogen took part in a series of workshops designed to encourage younger people to raise money for a charity close to their hearts.

10-year-old Imogen chose to support the Alzheimer’s Society by completing a sponsored climb, and she hopes that the money she has raised will help us to find a cure. She remembers her Great-Grandmother, who lived with dementia towards the end of her life – and she does not want any other members of her family to suffer.

Help Harry Help Others is a charity set up by Georgie Moseley to continue the work of her son Harry, who passed away in 2011.  Harry had begun raising money to find a cure for brain tumours, but he had also encouraged other children to raise money for causes which were important to them.

‘I’ve always said that all kids can achieve great things if we engage them, and the workshops prove this. They run for six weeks, during which time we will get to know each child’s personality and, more importantly, find out what’s going on in their lives that they would like to change. It can be a family member who’s suffering from an illness, a club they attend that desperately needs to raise money. It’s about the child and their own passions. We will help them create their own fundraising plan and make them realise that they can achieve anything if they care enough.’

‘I would like to thank Imogen for her dedication in fundraising for Alzheimer’s Society, and I hope she continues to think of exciting fundraising ideas to support us. Dementia is more than just memory loss; it robs people of their lives and has a devastating impact on families and loved ones. Money raised from local events, help us to continue our vital work in the fight against dementia – running services, funding research, and campaigning to help people live well with the condition.’